Aurizon’s Central Queensland Integrated Rail Project (CQIRP) has lapsed as you can see on the Queensland State Development (DSD) website.

Before their rail project lapsed Aurizon entered into an agreement with GVK Hancock. You can can read about it on the Aurizon website.

GVK chairman Dr G V Krishna Reddy was extremely confident about their deal to connect the south Galilee Basin block of mines. He is quoted on the Aurizon website saying:

This is one of the most significant deals in Queensland’s coal history. The development of the rail and port infrastructure will unlock the Galilee Basin and see the development of Alpha, Kevin’s Corner and Alpha West, creating one of the largest integrated coal development projects globally.

The reason the GVK chairman was so confident was because, like Adani, GVK Hancock possessed multiple Indigenous Land Use Agreements (ILUAs) covering their proposed rail corridor. The GVK Hancock rail corridor is designed to connect Abbot Point to mining leases nearly 500 kilometres south-west of the port. One of these ILUAs was made with the Wangan and Jagalingou People. It covers the southern most section of the GVK Hancock rail corridor and some mining infrastructure, but not mining activity.

You can find the Hancock Alpha Coal Project ILUA (Wangan and Jagalingou Area) on the National Native Title Tribunal website. 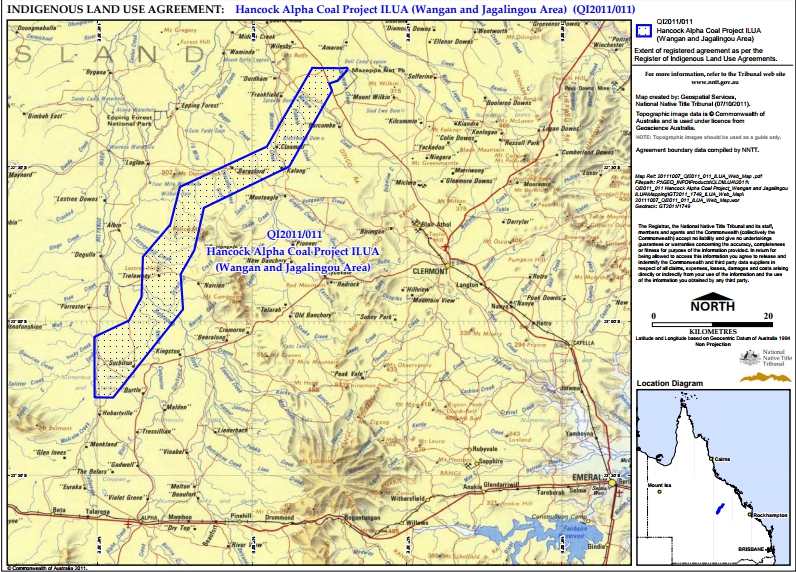 The northern most portion of this rail corridor section passes over Mistake Creek before it crosses the Gregory Highway adjacent to Mazeppa National Park. On the DSD website page for the North Galilee Basin Rail Project it states:

The southern end of the rail line would connect with rail infrastructure proposed as part of the Carmichael Coal Mine and Rail Project in the vicinity of Mistake Creek (west of Moranbah) and would run north to the Port of Abbot Point (near Bowen).

What the GVK Hancock rail project and the Adani rail project have in common is that they are both planned as standard gauge projects unlike CQIRP which was planned to be a narrow gauge extension of the existing Newlands and Goonyella systems currently in use servicing the Bowen Basin mines. What these two projects have in common that separates them from Aurizon as a rail project developer is that they have the necessary ILUAs to support project development. Adani have the three necessary ILUAs to develop the NGBR and GVK Hancock have the four necessary ILUAs to develop the rail component of the Alpha Coal Project and in the process connect four or more other coal mines to Abbot Point. You can read about these mines in the Queensland Department of State Development – Annual Report 2016/17.

GVK Hancock’s very confident media release from March 2015 titled ‘GVK HANCOCK HAS ALL INDIGENOUS AGREEMENTS IN PLACE FOR ITS PROPOSED MINE, RAIL AND PORT’.

Aurizon don’t appear to have any rail project ILUAs with the Wangan People, Jannga People, Birriah People, or Juru People. It seems highly likely that Aurizon’s ambitions to build a rail line with NAIF funding are connected to their relationship with GVK Hancock who have the necessary agreements in place.

It is not likely that Aurizon will seek to revive their narrow gauge CQIRP project. It has been reported from many sources that the coal industry strongly prefers new coal rail projects in the Galilee Basin to be standard gauge. One key source indicating a preference for standard gauge is an RTI disclosure from 2014 revealing communications between Queensland Treasury, State Development, and the Department of Premier and Cabinet bureaucrats. I discussed the disclosure in this blog post.

When I say “we know less” I’m not referring to “we” as in the general public, because the general public have been misinformed by silence and lies and cut n paste journalism. When I say “we know less” I’m referring to those who know some actual true information, and who, for the most part, don’t share that information. I’m referring to the messaging masters of the Stop Adani coalition NGOs and their think tank allies, the political parties (including the Greens), Fairfax, The Guardian, the ABC, and the NewsCorp press.

GVK Hancock and all the rail project ILUAs.