As long as the environmental movement stay silent or deny the new risks being created by any advance in carbon capture and storage, the bad guys win.

Look at that, a high-profile BigGreen spokesperson posing with captains of industry and welcoming the UK’s great hope for decarbonisation. The Teesside Collective ‘industrial cluster’ requires a pipeline leading to another pipeline owned by the oil and gas companies that own the CO2 storage locations under the North Sea.

Emma Pinchbeck from WWF-UK has managed to stay silent on the risks of storage and continued mining as did Simon Bowens from FoE-UK who welcomed the announcement of the Teesside Collective citing the need to “decarbonise” industry faster. Dustin Benton from the Green Alliance defends industrial decarbonisation against any criticism including the incalculable devastation from failed CO2 storage. Chris Littlecott from E3G played dumb.

In the last few months I’ve continued interrogating the messaging around carbon capture and storage, and I’ve been putting out more content of my own showing the advancing political will. I’ve had the occasional conversation with BigGreen folk of varying stripes and as you can see I’ve tried to capture those conversations with screen grabs.

A notable example is Anthony Hobley, CEO of the Carbon Tracker Initiative who couldn’t help but comment in response to my questions about their relationship with the Grantham Institute and it’s Bridging the Gap report from June 2015. His response shows that a massive commitment to carbon capture and storage is a foundational assumption underpinning our carbon budgets whose legitimacy even big oil and gas CEOs are publicly acknowledging.

“in our 2013 Un-Burnable Carbon Report we take the IEAs idealised scenario for CCS. That is approximately 3800 CCS plants operating by 2050. This gives you 125GtCO2. This extends the 2ºC carbon budget by 12 to 14%. Basically buys you 14 years. It is far from a magic bullet.” Anthony Hobley, CEO Carbon Tracker Initiative

The first CCS meme quoting a leader of any kind but not created by me appeared in August and was shared on Twitter by a range of CCS power plants, institutes/thinktanks and pundits. It confirms for me the primacy of IEA/Grantham/Potsdam Institute modeling in our carbon budgets. Third Way who created the meme were very happy with Obama’s ‘Clean Power Plan’.

In the memes below you can see explicit support for carbon capture and storage from the CEOs of some of the world’s most powerful fossil fuel companies. 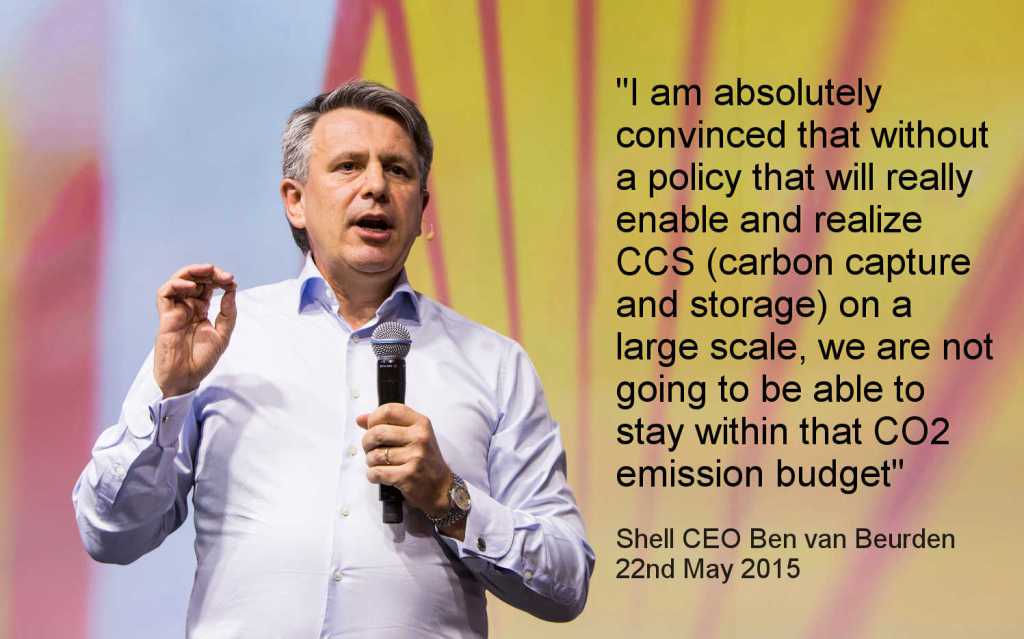 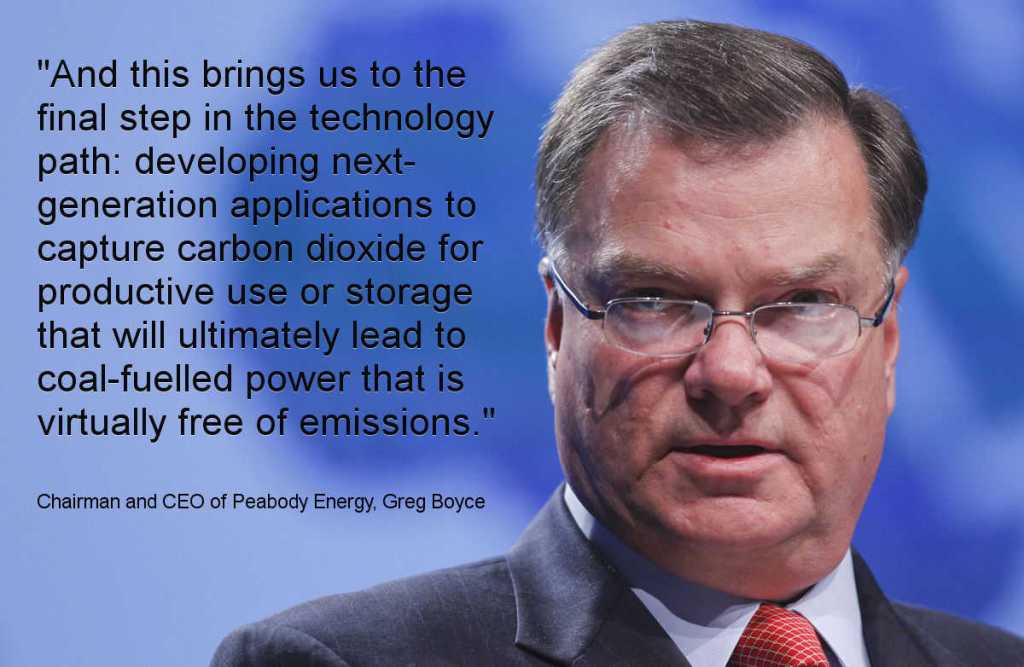 All three leading parties contesting the UK election in May 2015 had a commitment to carbon capture and storage in their manifestos while the Greens were mostly silent. Immediately after the election Ed Davey’s successor the new energy and climate secretary Amber Rudd was on the front foot. Current Labour leader Jeremy Corbyn is in favour of CCS.

Let’s get back to that Bridging the Gap report by the Grantham Institute. This is where the silence is deafening. I can find no one who will speak to it. It clearly favours gas CCS like Shell are planning at Peterhead with North Sea pipelines and storage as given.  The report says bio CCS or BECCS (imported wood pellets burned in place of coal) “should be a priority area of research”. Note: Shell has even raised the idea of a deep water port for imported CO2.

The Grantham Institute helped the Carbon Tracker Initiative develop ‘Unburnable Carbon’ back in 2013 with the help of the International Energy Agency and the Potsdam Institute. This established the language of carbon budgets and bubbles that is used by everyone from climate ‘justice’ activists to corporate CEOs. It’s a language that reflects nothing of the assumptions that underpin it.

It’s extremely disturbing that these two projects which both have a close connections to the London School of Economics have assigned the world its carbon budgets while simultaneously smoothing the path for a transformation of fossil fuel use. While the elite climate campaigners worked closely with the Guardian to popularise #keepitintheground Carbon Tracker and the Grantham Institute were working to ensure the opposite. Those elite climate campaigners rarely, if ever, speak about CCS, BECCS, undersea storage, or pipelines accept to say CCS is unfeasible and anyway fossil fuels are on their way out.

Nobody gets paid to look at this stuff. Everyone who knows their compartment knows not ask about risk or evidence or political will. Seems it’s safer to be silent….and it pays better.