In 2014 David Quinn was the Executive Director of Projects Queensland in Queensland Treasury. He was responsible for all coordinated projects worth more than 50 million AUD.

In a right to information request (RTI) disclosure made to Jeremy Tager at the North Queensland Conservation Council (RTI 493) David Quinn explains how the unspecified Galilee Basin rail project was “standard gauge” and that this was the key to “get the economies of scale”.

There are 2 rail projects proposed by Adani, the North Galilee Basin Rail Project is the one listed as “standard gauge”. It is a greenfield project that will vertically integrate Adani into the Galilee Basin coal complex providing rail infrastructure for several other mines for decades. The other rail project proposed by Adani is part of the Carmichael mine application. It is listed as “dual gauge” and is designed to connect to the existing narrow gauge system.

Here’s the full quote from David Quinn in RTI NQC493:

“The other issue here is that it is standard gauge which in a Qld sense is bespoke but makes sense for Galilee due to the need to transport the higher tonnages to offset the longer distances to get the economies of scale.

The benefit if it could be realised is the reasons you have previously outlined in that it becomes a vital piece of infrastructure, underwritten by ToP (noting the aversion of miners to this once common contractual arrangement) and that we would not drop a sleeper onto the ground until the Adani’s, GVK’s et are well and truly committed. Certainly a more liquid asset to allow our exit in the future.” 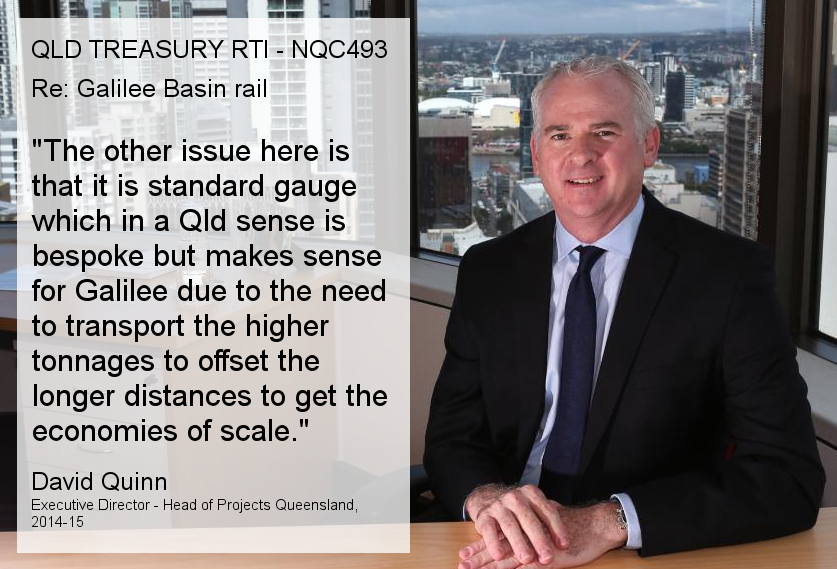 Adani have a tendency to telegraph their announcements through exclusives with large newspapers like the Courier Mail and India’s Economic Times. It was through a Courier Mail exclusive that we learned about the 1 billion dollar NAIF loan and for which rail project it had been earmarked.

Renee Viellaris in The Courier Mail:

“The Northern Australia Infrastructure Facility has ticked off conditional approval for the North Galilee Basin Rail Project and will now undertake more detailed assessments of the project. “

While the Queensland premier was visiting India recently the Economic Times printed part of a statement from Adani. This statement, while widely syndicated across English language media in India, was never picked up in Australia.

“Our vision is to operate a vertically integrated model – with the extraction of coal from our Carmichael Mine, transported by rail to Abbot Point, and exported to meet consumer and business demands in offshore markets. The project will build Australia’s largest thermal coal mine in the north Galilee Basin approximately 160km north-west of Clermont in Central Queensland, linked by a standard gauge North Galilee Basin Rail Line to two terminals at Abbot Point Port near Bowen,”

Why would the media in Australia ignore such a clear statement in favour of a specific piece of infrastructure that is under constant discussion here in Australia? One of the reasons is because they can, because no official media release is publicly available, and because the statement quoted in The Economic Times is a compromised primary source that can be easily ignored.

Either way the Adani quote specifies a “a standard gauge North Galilee Basin Rail Line” for a reason and that reason could well be because they want the market in India to feel confident that they are serious about having “a vertically integrated model”.

My current crowdfunding campaign is about digging up more answers by going back to a successful Qld Treasury RTI disclosure from 2014 on which the processing charge had never been paid. Treasury RTI 488.

RTI requests are all about the particulars of language.

Text of the RTI request:

“All documents relating to the announcement on November 17th in relation to the Infrastructure Enabling Agreement, including but not limited to the decision to provide Queensland government funding to facilitate Adani Mining Pty Ltd’s North Galilee Basin Rail project, including correspondence with the Department of Premier and Cabinet, Queensland Treasury, or Adani Mining Pty Ltd, its related entities or agents for the period from 1 September 2014 to 9 December 2014.”

Here’s a link to my crowdfunding campaign:

3 thoughts on “Only a “standard gauge” rail line will deliver the economies of scale to open up the Galilee Basin.”