On December 6 I shared a thought exercise on my Facebook page and on my Twitter account. It’s something I’ve been considering for a while and an attempt to sum up the difficult tension between wanting to protect the environment and at the same time deal truthfully with the reality of the economic life of traditional owner communities.

I was prompted to post the thought exercise after reading this piece by John McCarthy in The Courier Mail/Townsville Bulletin and reading a quote from Wangan and Jagalingou man Pat Malone who is in favour of the Carmichael mine. The Pat Malone quote was shared on Twitter by the deputy editor of the Townsville Bulletin, Damian Tomlinson, a noted critic of the StopAdani coalition whose Twitter page features a photo of a bumper sticker that says “Don’t take away my coal job and I wont take away your soy latte”.

Here is the thought exercise.

Imagine if we could out-bid Adani and pay the four traditional owner groups that exist within the Galilee Basin coal complex area the money they need to care for country and community.

Imagine if the green bloc bothered to consider the Juru, Birriah, and the Jannga peoples who signed ILUAs in 2014/15 under the threat of compulsory acquisition.

The responses from 2 key Aboriginal leaders interested me. I’m going to share them here and attempt to explain my feelings about their statements.

Warren Mundine replied to my thought exercise with what reads like a strawman argument insinuating that I am yet another white man who thinks that throwing money at blackfellas will solve their problems. In my defense I would say that I am trying to capture the sentiment put forward by Pat Malone that limited economic opportunities need to be grasped, especially when choices about how to respond to the heavy weight of callous state governments who employ the threat of compulsory acquisition which imposes a sense of the inevitability of mining companies coming onto country and doing damage as they always do leaving traditional owners with the difficult choice of fighting what will probably be a losing battle or going into business and becoming a stakeholder in the economic opportunities that mining companies and state government may bring.

Marcia Langton’s response defies what I have learned in my research into the native title system. What I have learned is this: Things are complicated, history is complicated; The Native Title Act has been manipulated in favour of governments and mining interests leaving Indigenous people as the perennially weaker party in negotiations; The Native Title Act informs the functions of the National Native Title Tribunal (NNTT) in inscrutible ways; NNTT case managers employ procedures that fail to capture the appropriate data to arbitrate disputes over voting meetings for Indigenous Land Use Agreements which are rock solid corporate contracts that are often made with mining companies; NNTT case managers are unable to fully explain why the procedures they employ exist and why they function the way they do. 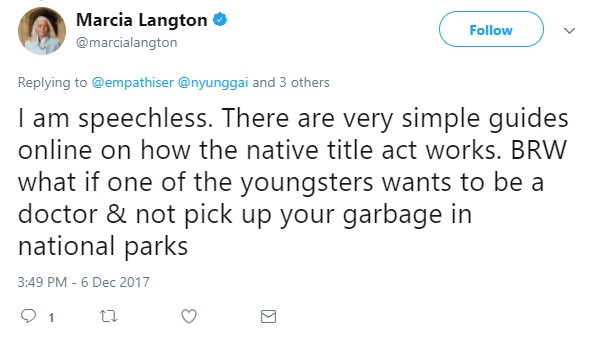 As a final note I want to share an observation I have made about the Aboriginal people whose lives and dealings I have looked into in the last year or so.

Down to the last person, every Aboriginal person whose business I have looked into, every person in a position of leadership or influence has had the care of country and their community front and centre. I’m not bullshiting you. Every single one. No matter how much I think they are being manipulated or co-opted. No matter how much I despise their allies, they have all had the sharing of wealth and the desperate desire to begin to heal their communities at the heart of their efforts and intentions.