The Climate Chief, the Summit, and the Silence

Last week Christiana Figueres spoke at the 2nd annual Australian Emissions Reduction Summit. While she did not include carbon capture and storage in the body of her speech she did take the opportunity during the Q&A section to speak to the importance of investment in fossil fuel based carbon capture and storage. Strangely her statements were in response to a question about the urgency of beginning “draw down” using “natural” methods including BioCCS. 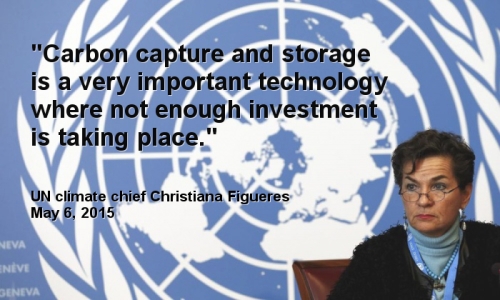 Christiana Figueres’ comments place her on record with the majority of energy secretaries, CEOs, and climate negotiation leaders as being in favour of the expansion of CCS.

Given that fossil fuel based carbon capture, storage, and utilisation threatens to give fossil fools and rampant consumption a promising future, it’s worth asking who took notice of the climate chief’s comments and who met them with silence?

Of the legions of staffers, public servants, and politicians who are traded with the mining, extraction, and energy generation industries in Australia, Martin Ferguson is clearly the highest profile. His controversial move to join the Australian Petroleum Production and Exploration Association was followed early this year with his appointment as chair of leading carbon capture and storage research centre (which he opened as minister in 2008) CO2 CRC.

So who was silent? From what I can gather, everyone. Nothing from the BigGreen pundits, and the Guardian and Fairfax reported that the climate chief signaled an end for coal?

Here’s a link to the video of the UN chief’s address titled: UNFCCC Executive Secretary Christiana Figueres’ address to the 2nd Australian Emissions Reduction Summit. Go to 44.50 for CCS comments.

The Christiana Figueres CCS meme above was recently posted by @SaskPowerCCS I’m happy for them to use my meme without credit. They represent the only commercial CCS with CO2 for EOR complex in the world. Their enthusiastic support for the UNFCCC chief’s comments speaks volumes.

To me it is clear that the UN climate chief’s comments were tailored for the people who know that the real game lies in the continuation of coal mining, and sucking oil and gas under the nebulous cloak of “clean energy”.

3 Comments to “The Climate Chief, the Summit, and the Silence”