I went to the State Library of Queensland the other night after speaking with a lawyer from the Environmental Defenders Office Qld. There I used microfiche (for the first time) to scan the article where it was announced to the world that the Northern Australia Infrastructure Facility (NAIF) had given “conditional approval” to a 1 billion loan for North Galilee Basin Rail Project (NGBR). The original article, which appeared on page 15 of the Saturday edition of the Dec 3, 2016 Courier Mail (CM), has all but disappeared from the internet. As the recent NGBR update from EDO Qld states, the media “broadly reported” the news of the NAIF loan. I discussed with the EDO lawyer this aspect of how members of the general public and the media have come to believe, or not be aware, or not believe that the NAIF loan is ‘earmarked’ for the NGBR. The EDO lawyer agreed that the Courier Mail article was a compromised primary source. I went further and argued that the buried nature of the article and it’s absence from the internet made it almost impossible to reference, easy to miss, and very easy to ignore. If the media, activists, and the public are limited from knowledge of a project then they are largely prevented from investigating and analysing the threat posed by that project. 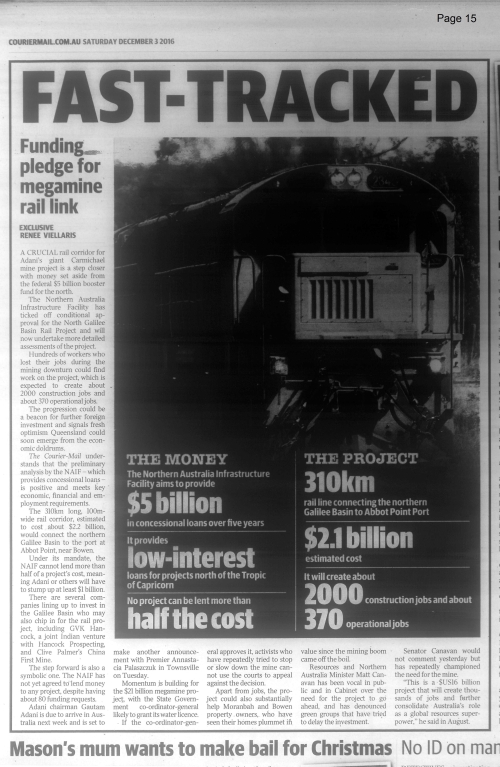 I believe Adani and the state and federal governments are playing a ‘shell game’ with the rail projects in the Galilee Basin. By “shell game” I mean the classic confidence trick with three shells and a pea where distractions and deft movements are used to fleece members of the public. Shell games involve the masking of the most important objective, that the victim should lose track of the position of the pea and a chance at winning. The most important objective – in my reckoning – is ensuring that the North Galilee Basin Rail Project is met with little resistance because it is THE piece of infrastructure that makes the Galilee Basin coal complex possible. This is why I believe that Adani have fused their second rail project, the 189 km east west connection to the existing narrow gauge system in the Bowen Basin, with the coal mine project. By fusing a rail line with the coal mine it creates an appearance that can be readily assumed to be the whole picture. Every time the full name of the Adani mine project is read or written, a rail component is affirmed, and all that is needed to keep a second rail project from interfering with the assumption that the rail project attached to the mine is indeed “the” Adani rail project is to obscure the real rail project, the North Galilee Basin Rail Project.
Shell games require slight of hand. A key component of deception/distraction here is the media and the quality of primary sources. Finding definitive primary sources about the North Galilee Basin Rail Project is extraordinarily difficult. Which is why this buried article which passes on statements made only to the Courier Mail and then telegraphed to the rest of the media is important to understand.
The NGBR update provided on April 18, 2017 by EDO Qld was a response to the information giving requirements of a particular group of clients, most likely environmental NGOs like the Mackay Conservation Group and the Australian Conservation Foundation. It is the first ever statement on the NGBR by EDO Qld. This is significant, EDO Qld provide legal support for their clients, they do not campaign on issues, but rather, they provide legal support for their client’s campaigns.  As such they only publish information in line with the objectives of their clients.
Here’s a link to my crowfunding campaign to disclose a successful RTI request relating to the NGBR from late 2014: https://chuffed.org/project/50920-to-disclose-some-truths-about-adanis-rail-plans